The 8 Most Expensive Nike Shoes

For many people, a pair of sneakers are purely functional. They are a casual pair of shoes and, in some instances, can help you perform better at sports. To others, Nike shoes are a prized possession, giving people reason to collect the latest, limited-edition models. While a pair of Nike tennis shoes are not cheap by any means, some of the Nike shoes included on our list are priced at exorbitant amounts. Limited edition runs and scarce availability drive the price of these Nike shoes to astronomical heights.

The Nike MAG Back to the Future sneaker is the most expensive Nike shoe. Priced at $200,000, this limited edition shoe was released in both 2011 and 2016. Nike released the shoes onto the auction website eBay to raise money for The Michael J. Fox Foundation. The shoe is modeled after the iconic Back to the Future movie and is intended for display only.

While many of the shoes on our list of the most expensive Nike shoes available reach prices well over a thousand dollars, some are “only” a few hundred dollars. For many, buying a limited edition Nike shoe is an investment, as recent years have only escalated prices higher. Most of our shoes featured on this list are collaborative designs featuring contributions from high-end designers. If you are in the market for a rare, one-of-a-kind Nike tennis shoe that you really shouldn’t wear, you will be interested in one of Nike’s top eight most expensive shoes. 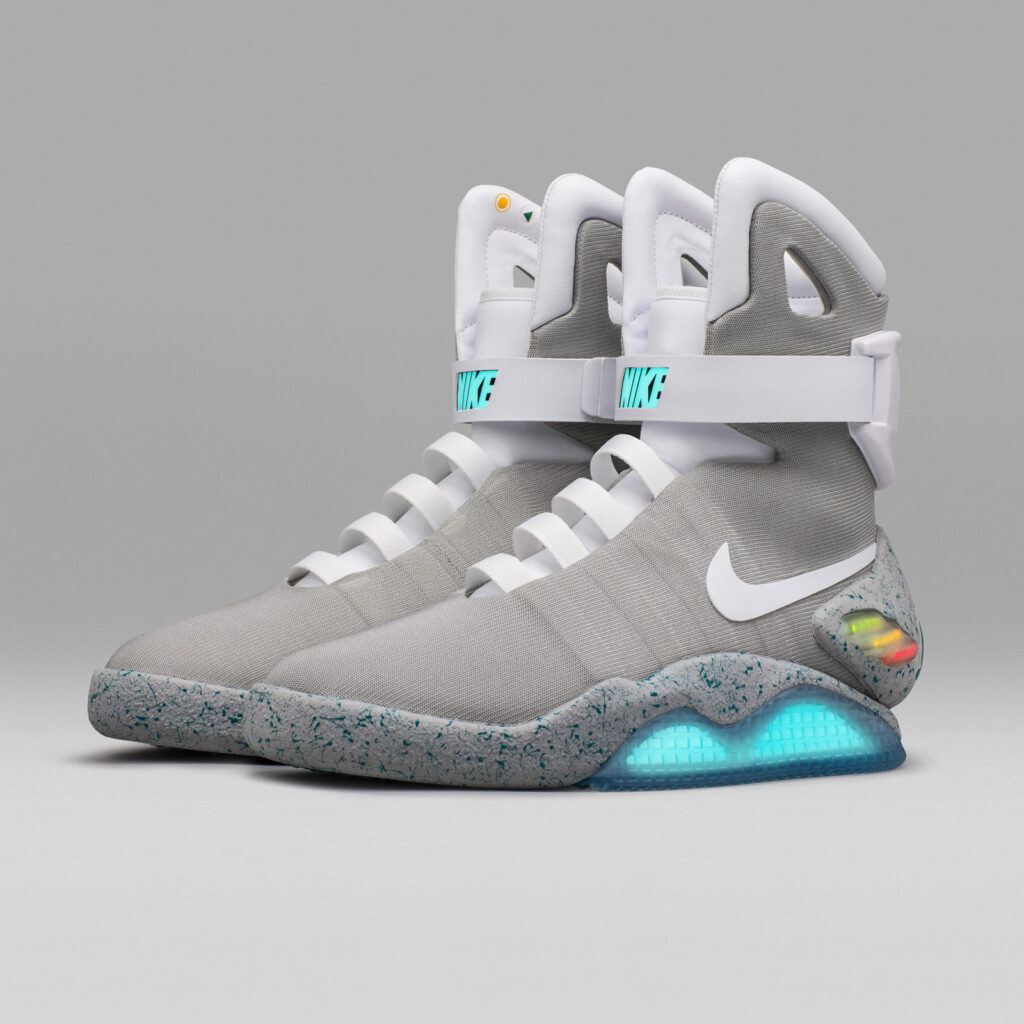 While the retail price of this particular Nike shoe was not $200,000, the limited supply and production line have skyrocketed the price in recent years. The Nike MAG was a limited-edition shoe that was first released for sale in 2011. A second, smaller release came out in 2016. The first run of Nike Mag issued just 1,510 pairs of this iconic shoe, while the most recent release was held to only 89 pairs.

Inspired by the movie Back to the Future, these shoes are meant for display and should not be worn. After the initial run of shoes was released, 1,500 pairs were put on eBay for auction by Nike, with all of the proceeds going to The Michael J. Fox Foundation for Parkinson’s disease treatment and research. Most of the shoes sold for around $12,000. Today, the limited supply of the Nike MAG still in existence has caused the price to increase, becoming the most expensive Nike shoe available.

The shoe itself is a sneaker modeled after Back to the Future shoes. The shoes are gray, have a high ankle with white strapping, and a chunky sole detailed with blue lights. The shoes occasionally appear at auctions in various men’s sizes. 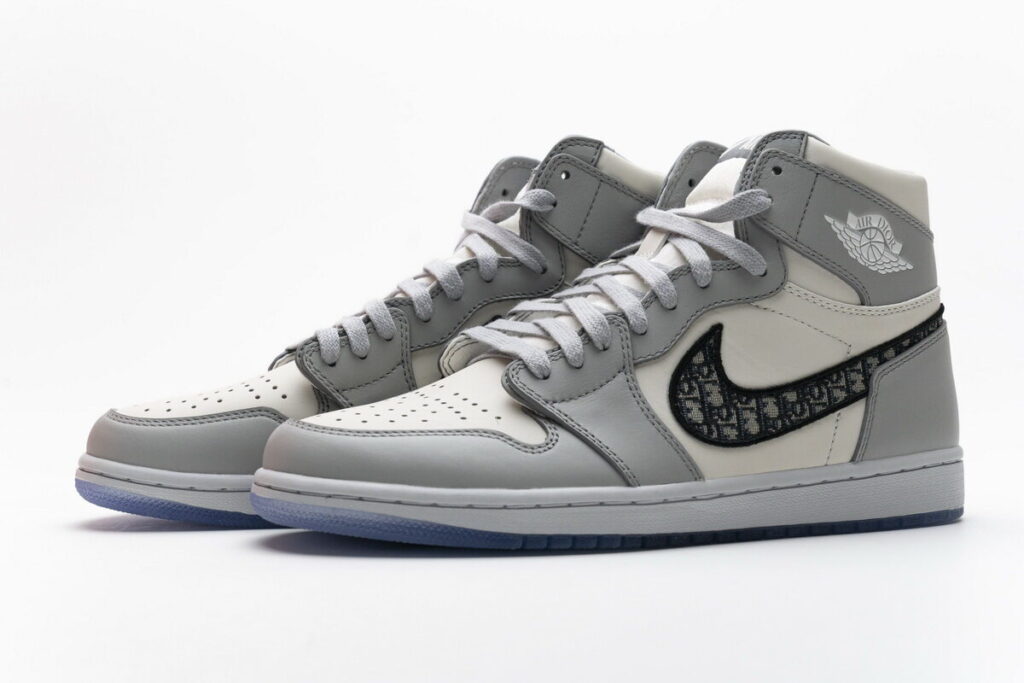 Another limited edition pair of Nike shoes hits our list of the most expensive Nike shoes available. The Nike Jordan 1 Retro High Dior tennis shoe is selling for auction, priced at $9,890. The Jordan Brand collaborated with famed-fashion designer Dior to create this combination shoe. This particular shoe design marked the first time Nike teamed up with a fashion designer to create a special, limited edition shoe. Only 8,500 pairs of the Nike Jordan 1 Retro High Dior shoe were produced, and each pair is individually numbered.

The actual tennis shoe is white and gray and is made of leather on the upper portion of the shoe. There is both the traditional Nike Swoosh and the Dior monogram detailed on the side of the shoe. Crafted in Italy, the Nike shoe is made with high-end materials and features icy translucent soles, a silver “Air Dior” tag, and a Dior branded tongue. The shoes were first released in April 2020, with prices set at $2,000. Limited availability has caused the prices to increase drastically, and the shoe is only available through collectors or online auctions.

Virgil Abloh left an impression around the world, making strides in fashion and art. Combining streetwear style with high fashion, Abloh routinely collaborated with other artists and designers to create something truly remarkable. Working together with Nike, Virgil Abloh created a second iteration of his famed Off-White Air Force 1 shoe. Used in his Figures of Speech exhibit, these Air Force 1 shoes have special coloration, making them highly coveted. The very first pair created was given to Serena Williams as a gift in May 2019.

Since then, the Air Force 1 Low Off-White MCA University Blue shoes have been difficult to find due to their low production volume. Initially retailing for just $150, this shoe today routinely fetches $2,499 at auctions. The shoe features a leather upper made in blue sky leather, a silver deconstructed Swoosh, white laces, a patented red zip tie, and Off-White branding located on the Swoosh. The shoe was first released in July 2019 but has been increasingly rare to find. 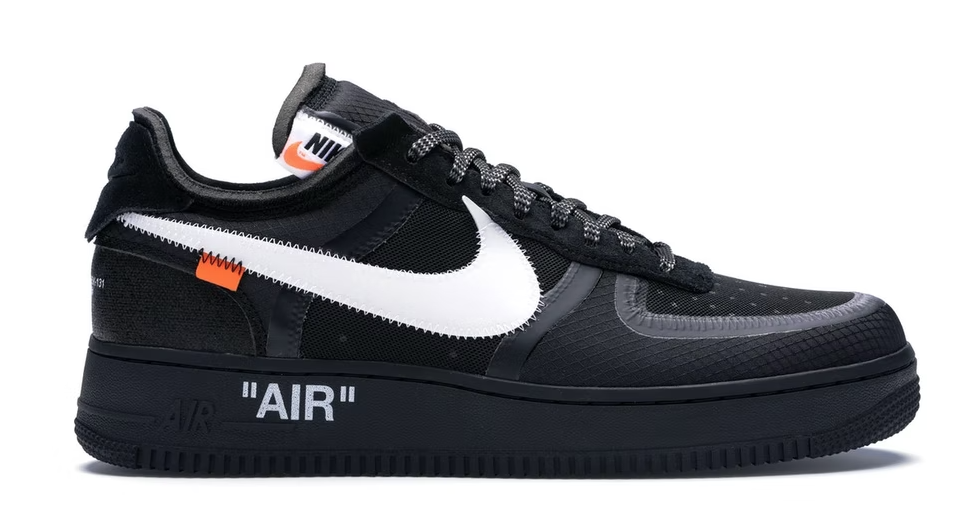 The Nike Air Force 1 design is a popular model driving up the price when it comes to the most expensive Nike shoes available. Many of the costly Nikes are only available through auctions due to their limited release and sparse availability. The Off-White Nike Air Force 1 in black is no different. Designed as a collaborative creation between streetwear brands Off-White and Nike, this shoe was initially released in December 2018. While today the shoe can bring $1,775 from a collector at auction, the shoe initially retailed for just $170.

The Nike Off-White Air Force 1 shoe features a black upper made of leather with a simple, white Nike Swoosh design on the side of the shoe. The shoe boasts a black sole and black midsole, with bright orange tags and labels accenting the shoe. The Air Force 1 collaboration with Off-White was the first of two specially released limited edition shoes. The shoe is available for men only. The beauty in this design comes from its simplicity, creating a striking and original shoe.

If you are searching for a fun and funky shoe that pays homage to your favorite band, the Nike SB Dunk Low with the Grateful Dead finish might be just the shoe for you. This shoe was originally released in July 2020 and retailed for the standard $110 price. However, limited production lines and fanatic Grateful Dead fans flocked to this shoe, and soon, the price escalated to $1,091. These shoes are primarily available on online auctions or through collectors.

The Nike SB Dunk Low Grateful Dead Bears Green was inspired by the original dancing bears created by Bob Thomas on the back cover of the History of Grateful Dead, Volume One record, released in 1973. Today, the shoes feature a funky green color made with faux fur on the traditionally leather uppers. A suede overlay with a jagged Nike Swoosh helps highlight the original stylized bears from the album. The midsole is the same funky green and is offset by a blue outsole. Signature Grateful Dead branding can be seen on the shoe’s tongue. 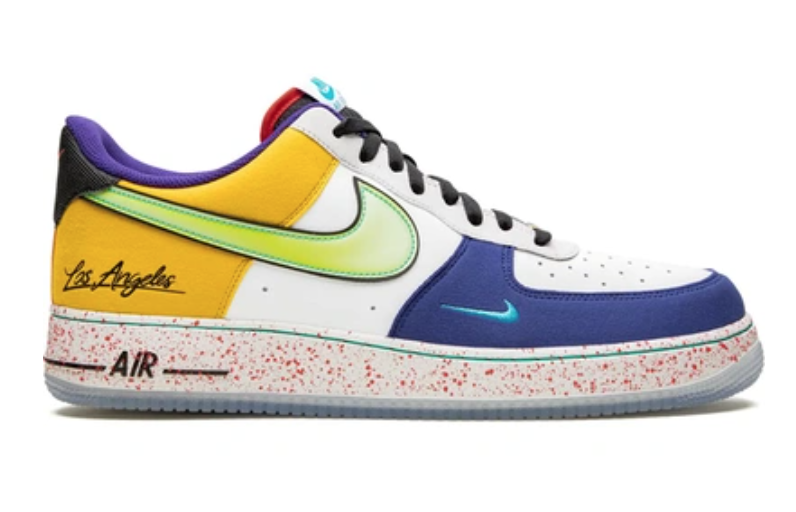 Created as a celebration of Los Angeles sports teams, this Nike Air Force 1 Low “What the LA” is now in high demand by shoe collectors around the world. Coming in at $919, this Nike shoe quickly makes our list of the most expensive Nike shoes available. The shoes feature a mixed pallet of colors paying homage to the great sports teams to come from LA. The uniforms of the Lakers, Kings, Clippers, Dodgers, and more are all represented in vibrant and bold colors, making this an eye-catching shoe.

The “What the LA” Nike shoe has the traditional leather upper detailed in contrasting colors that float down on either side of the panel. The trademark Nike Swoosh is visible, with the words “Los Angeles” scripted around the heel. The forefoot features a small embroidered Nike Swoosh symbol to complete the look. Intentionally, the midsole is mismatched with the outsole to create a cohesive yet mismatched theme. This shoe first hit the shelves in November 2019. Since then, limited production and high demand have increased the price every year. 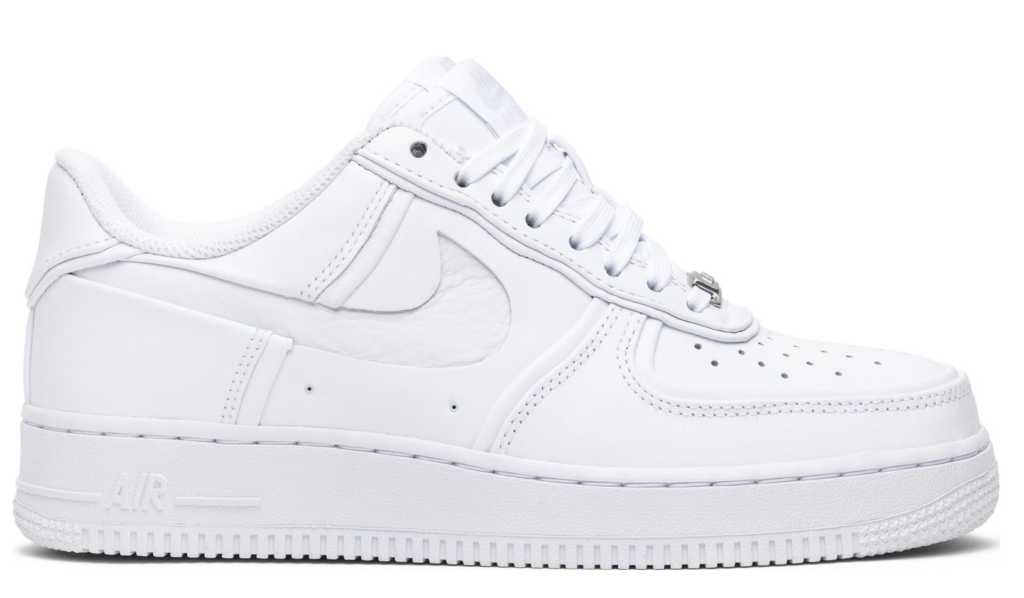 Famed designer John Elliott worked together with Nike, perpetuating a long line of design collaborations with the illustrious tennis shoe company. Coming in at $806 for a pair of John Elliott Triple White Shoes, this tennis shoe has made our list of the most expensive sneakers available.

This iconic shoe is widely collected, and today, most people will only be able to find the shoe through online auctions or by contacting a collector. While these tennis shoes could certainly pair with any outfit, it is best to keep these shoes unworn and in mint condition to retain their astronomical value.

The John Elliott Triple White Nike Air Force 1 Low takes an innovative shoe design approach by creating a stark white, Triple-White color pallet. The design manages to still give some contrasting colors by creating the illusion of darker colors as texture and pattern run throughout the upper leather portion of the shoe. Multiple layered fabrics and overlays work together to create this illusion.

In addition, the die-cut Nike Swoosh on the side of the shoe creates a pebbled leather texture, compared to a traditionally smooth texture, bouncing light and creating the illusion of darker colors. The same layered technique continues to the metal lace tips too. 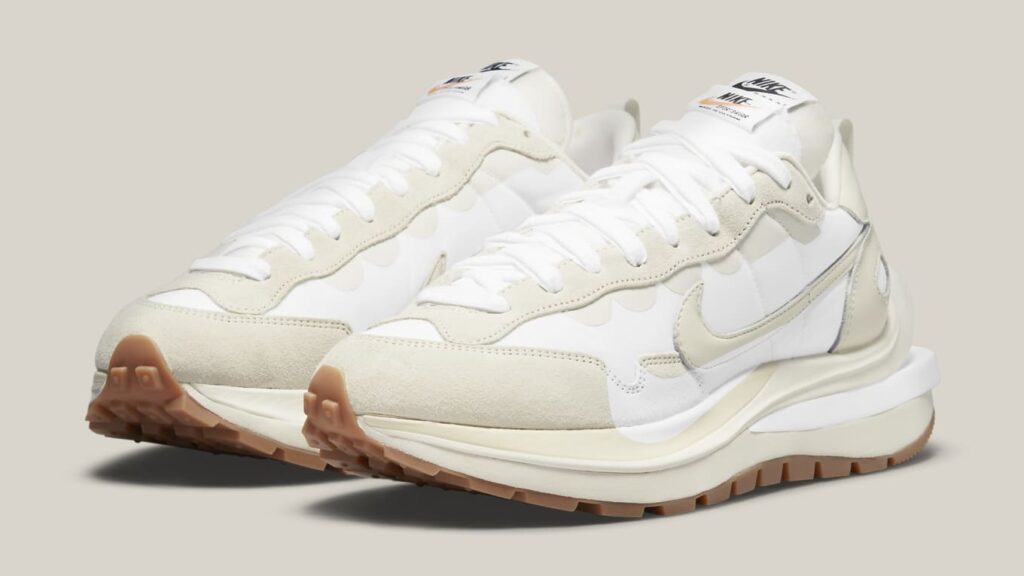 Months of waiting have finally paid off for Nike and Sacai fans, as the newest release of the VaporWaffle has just been released. The Nike VaporWaffle X rounds out our list of the most expensive Nike shoes available. The original VaporWaffle hit shelves in early 2020 and was included in the Sacai Fall 2020 runway show for men. The abstract design excited collectors instantly. Today, the Nike X Sacai Vapor Waffle embodies the past and future of Nike running. Elements from the original Nike Vaporfly and Pegasus shoe from 1983 were included in this newest iteration.

The shoe features a white nylon body that combines Sail suede and leather overlays to create a compounded, layered effect. The monotone color patterns are a trademark of the VaporWaffle. The outsoles are constructed with gum rubber, and the two tongues double up to make a unique and exciting style. While designed as a running shoe, most people wear this shoe as an everyday, casual sneaker.

High-end collectors simply collect and display the VaporWaffle. Although this shoe was originally released in black and white, other color patterns have been released recently. The original shoe retailed for just $180. Finding this shoe in different colorations may be possible for slightly less money.

Nike shoes have been around for decades and continue to provide high-quality sneakers that out-perform the competitors. Recently, Nike has started to partner with high-end fashion designers to create limited edition shoes that excite collectors around the world. With iconic patterns, homage to pop culture phenomena, and innovative designs, this list of the most expensive Nike shoes features some of the world’s best designers.

Whether you want to wear a pair of limited-edition sneakers or simply want to purchase a pair of costly sneakers for investment, these shoes are sure to excite collectors around the world. You never know; maybe your next pair of standard Nike sneakers could end up on this list of the most expensive Nikes in years to come!