10 Most Expensive Dart Sets (to Improve Your Game)

To any darts enthusiast out there, the darts themselves are their bread and butter and can make or break a game. When it comes to price, many wonder if there’s any advantage to spending more on darts and does having more expensive darts make a difference when playing?

Expensive darts tend to be made of higher quality materials, such as tungsten. Generally speaking, the higher the percentage of tungsten, the more expensive the dart will be. Other, less expensive darts, are usually made of metals like nickel and brass. These darts will typically wear down faster and have a different feel in your hand.

Wondering if you have the budget to afford the best darts in the world? Let’s take a deeper look at the top 10 most expensive darts on the market. 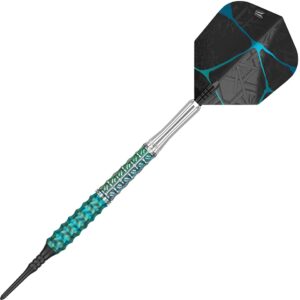 Although Target Darts are based in the UK, they frequently make visits to Japan to help the Target Japan team on a variety of creative projects. The Elysian Sixth Edition serves as an homage to Japan, as the team took inspiration from the country’s unique culture. Each dart’s barrel is made of 95% tungsten and endures 62 minutes of milling and re-machining before they are coated.

The barrel of these darts is simply breathtaking to look at, coated in a beautiful shade of DLC that combines blues and greens. Target Elysian sixth edition’s packaging is also precisely designed and heavily influenced by the team’s visits to Japan. This can be seen in the intricately lasered aluminum panels that imitate the Japanese art of ‘Kumiko.’

Every product comes with a set of three flights (No.2, Kite, and Ten-X), as well as two sets of shafts (medium and intermediate), a 100% cowhide Elysian wallet, a bespoke pin, and flight protectors. Regularly retailing for $745, these darts are the most expensive set on the market Though, they are currently on sale through A-ZDarts.com for only $465.99 – a 37% cost savings. 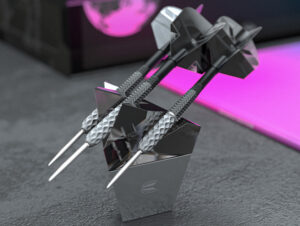 The Target Elysian Seventh Edition (Generation 7) dart is seven years in the making. Each product is sold in a set of three, for $725. Though, A-ZDarts.com currently has them on sale for $615 – a 15% cost savings. This Makes the Elysian 7 dart, the most expensive dart in the world. Like all other Elysian darts, this edition is limited to only 200 steel tip sets and 200 soft tip sets worldwide.

The idea behind this is that Target wants their Elysian darts to be a special and limited showpiece each year, and not just like any other commercial dart on the market. This year’s design was inspired by space, which is evident in the fifth-dimensional feel of the presentation box. Meanwhile, the color scheme of the barrels is a striking and futuristic combination of black and silver.

These darts are truly stunning to look at and it’s clear that some serious skill and precision goes into their construction. The darts feature two uniquely sculptured grip areas, offering unmatched grip and feel.  Each dart is made of 95% tungsten and endures 55 minutes of high precision CNC milling. So, to create an entire set takes about three hours on the machine, not including the assembling, coating, and packaging processes. 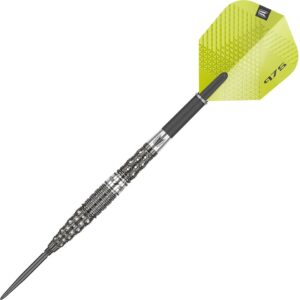 Manufactured by Target Darts, the 975 was inspired by their Fourth Edition Elysian dart. These darts get their name form their 97.5% tungsten density, which is the highest in the entire Target range. Their design feature’s Target’s distinctive Cell Grip, which is offset against modern radial grooves at the back to yield superior grip and feel. To further boost performance, the darts are finished with a gorgeous coating of black titanium nitride.

The Target 975 comes in a soft and a Swiss Point steel tip. Swiss Point refers to a patented interchangeable point system that allows you to adjust the point’s style, color, and length in seconds. These darts come with a pocket-sized Swiss Point tool, which is all you need to remove and install your points as desired.

Regularly retailing for $264.50, the Target #975 darts are considered to be the third most expensive darts on the market. Though, both the soft tip and the Swiss Point steel tip version are currently on sale for only $230 – a 13% savings. 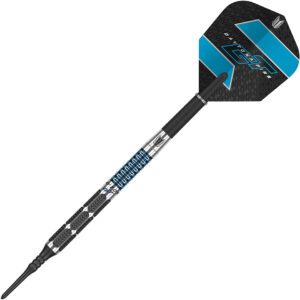 An extension of Target’s Daytona series, the Daytona Fire GT has the same distinctive Trapezoidal grip technology, offering the most sophisticated grip and feel. Each dart is made of 95% pure tungsten and overlaid with a blue performance coating made of Titanium Nitride. This further enhances grip and offers long lasting protection for the barrel.

Considering the quality of the materials and the attention to detail paid in the construction of these darts, it’s easy to understand how they are among some of the most expensive on the planet. A set of the Target Daytona Fire GT10 darts will typically run you around $247, however, they frequently show up on sale on Amazon, depending on the seller. These darts are unisex and can be purchased in a soft tip and steel tip version. Each set comes with three barrels.

Though, head over to A-ZDarts.com if you want to snatch up one of their Target Daytona Fire GT10 dart sets that available for immediate delivery. Plus, they’re on sale right now for $245! 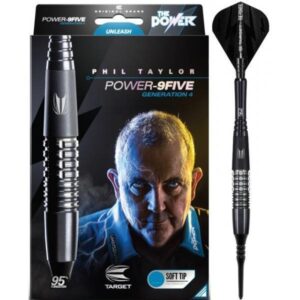 Named after the famous English darts player and sixteen-time Champion of the World Phil ‘The Power’ Taylor, Target’s Phil Taylor Power 9-Five’s are the fourth generation of this style. They were developed for Phil Taylor and Target worked closely with him to perfect this generation. These are among the best performing and sharpest looking darts on the market.

Compared to the previous generation, Phil desired an enhanced, subtler grip at the rear of the barrel to adjust the feel and comfort of the dart. This was achieved by hand sandblasting the rear section of only the barrel of each dart, with incredibly find particles to yield a clear matte texture. Then, the barrel is covered in an ultra-hard black titanium nitride coating to protect and extend the life of the barrel.

Target also upgraded the point of these darts, including a Titanium Coated Black Diamond Pro point to minimize board fall-outs. The Diamond Pro also delivers a grip area for players that prefer to rest a finger on the point while throwing. These darts will usually run you $242.65 and come in a steel tip and soft tip, as well as a range of different weights.

For a limited time, you can get the Target Phil Taylor Power 9-Five Generation Four darts on Amazon for less than $150. 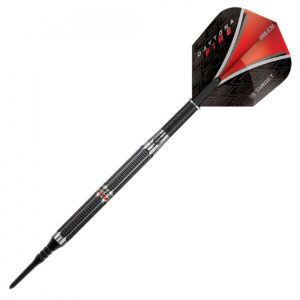 Another dart from Target’s Daytona Fire series, this is their model DF-11. These darts take inspiration form the design and nearly perfect form of Target’s Elysian series. They have the same distinctive trapezoidal prisms, 95% pure tungsten construction, and are covered with a titanium nitride performance coating. Unlike the aforementioned G10 model, this model has an appealing red, black, and silver color scheme.

Each purchase comes with a full set of three darts, and you can find both steel tip and soft tip options as well as a variety of different weights. The Daytona Fire DF-11 darts typically retail for about $241.50, however, they are frequently on sale from a number of retailers. Currently, you can get a set of three soft tips for less than $150 on Amazon. 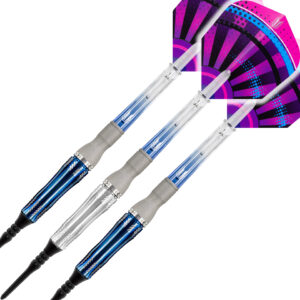 Named after the Japanese darts player and two-time World Champion of the same name, Target’s Haruki Murumatsu Rising Sun Generation Six darts are a spectacle. Target partnered with Haruki to create darts that not only reflect is legendary status, but also emulate the quality, design, and innovation of Japanese engineering.

These darts feature a slim barrel design, accented with teal rings. They are wildly different from previous generations, as they have ultra-simple grooves with gradation width that help add a sense of security with the grip. This new grip offers a unique outline and weaves a fine and elaborate groove. In order to create these tighter groupings, these darts are manufactured with a maximum diameter of 7.10mm.

Target’s Haruki Murmatsu Rising Sun Generation Six darts will usually run you $240 retail, but you can find them on A-ZDarts.com for $204.00 – a 13% cost savings. They are currently in stock, ready to ship, and come in a set of three. 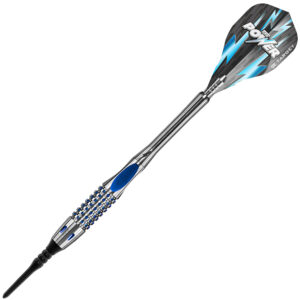 Phil Taylor’s Power 9-Five Generation two darts are made of 95% tungsten and include The Quattro Grip. This was Target’s latest innovation when these darts were originally released back in 2015. The fact that they are still considered one of the most expensive darts in the world is a testament to their performance and design.

The Quattro Grip involves four equally-spaced power pockets that are milled precisely at the rear of the barrel, enhancing grip and feel while also allowing for a more consistent grip positioning. Coated in Azzurri Blue Titanium Nitride, with Pixel Grip Technology, and the Quattro Grip are what make this barrel design truly unique.

Available in a range of weights, as well as soft tips and steel tips, the Target Phil Taylor Power 9-Five Generation Two darts retail for $235.18. However, you can head over to A-ZDarts.com and get them for only $204.50 – a 13% cost savings. Each product comes with a set of three darts. 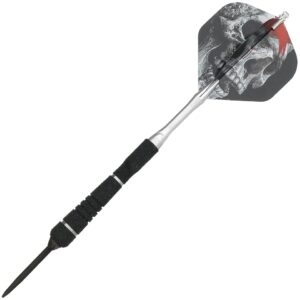 Bottelsen American Dart Lines is one of the few remaining dart manufacturers in the United States. They’ve been designing and manufacturing championship quality darts for more than forty years. Owner Walt Bottelsen transformed dart design back in 1977 with his invention of the Hammer Head No Bounce Dart, which basically eliminated bounce outs.

Bottelsen’s Shark Skin Xtreme GT Plus Hammer Head darts cost about $240 retail. However, A-ZDarts.com currently has them on sale for $200 – a 17% cost savings. Each product comes with a set of three darts. 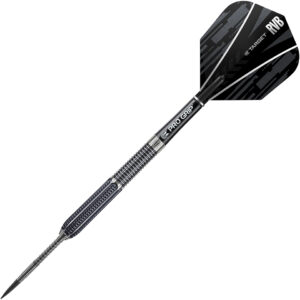 Developed for and used by five-time World Champion Raymond van Barneveld ‘RvB’, these darts were first released in 2017. They were crafted to his exact specifications, to produce ideal results for his unique throw. Made of 95% tungsten, the RvB 95 darts are cut with a combination of trapezoidal milling at the front end and contrasting radial grooves at the rear.

They are coated in a black titanium finish and fitted with pixel soft tip points, Though, these darts are also available in a steel tip version. The RvB 95 darts are excellent for professional use and make a wonderful gift for both dart lovers and enthusiasts.

Each product comes with three barrels, three 2BA shafts, three flights, and three 2BA soft tip points (unless you purchase the steel tip darts). You can also find these darts in weights that range from 17 grams to as much as 25 grams. Target’s Raymond Van Barneveld RVB 95 Generation One darts regularly retail for $228.28. However, you can frequently find them on sale for much less on Amazon, depending on the size and seller.